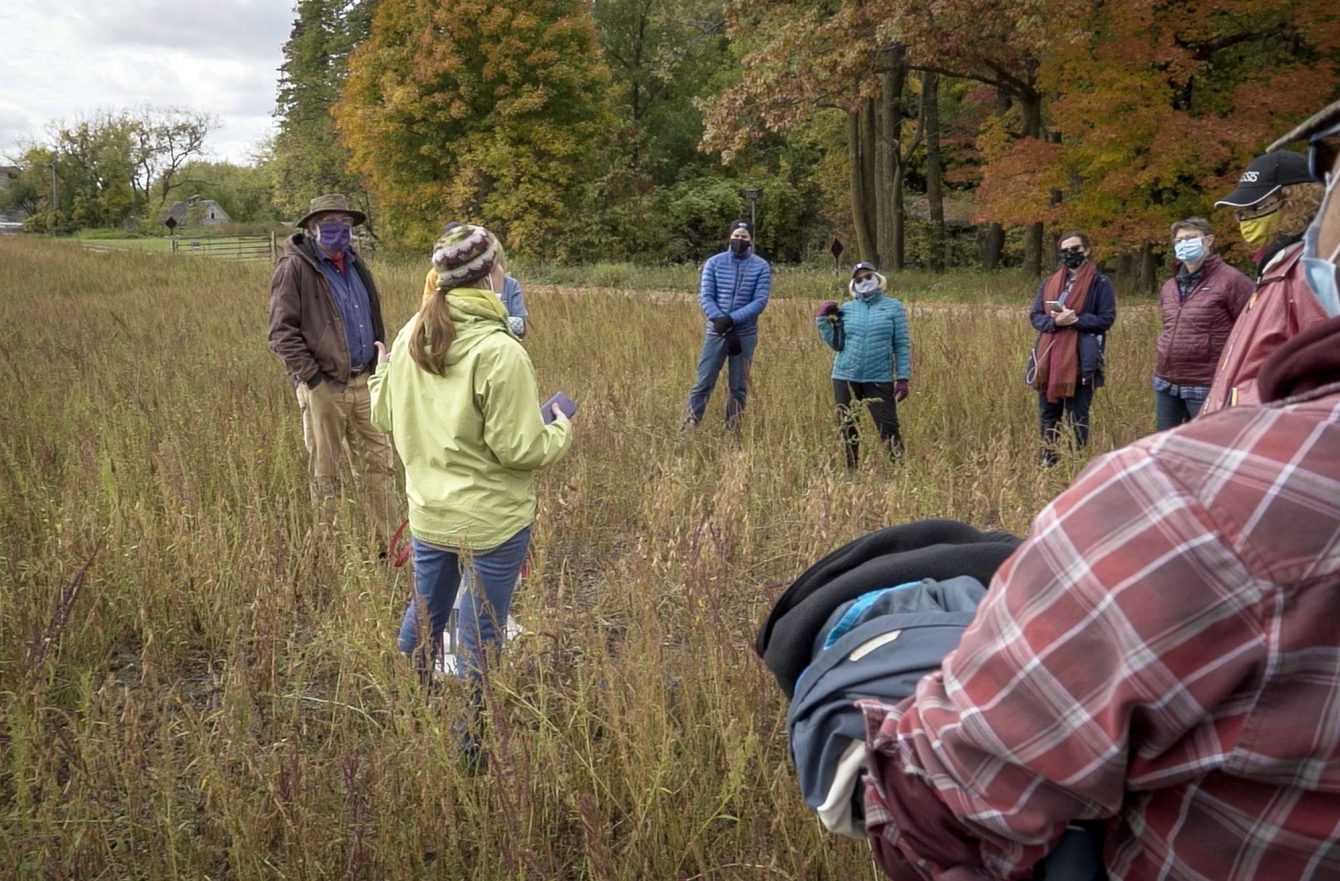 Climate Land Leaders™ ventured to Alexandria, Minnesota, on Saturday, Oct. 3, to tour the amazing conservation work of fellow Climate Land Leaders™ Sylvia and Joe Luetmer. Interest was keen in their innovative work to graze the established prairie across the road from their home.

In 2003, the Luetmers enrolled the 40 acres in the Conservation Reserve Program (CRP). To prepare the cropped land for prairie, they asked their renter to plant soybeans and leave the stubble. “Then in the spring, we used a no-till drill to plant the prairie mix into the bean stubble. We used one pre-emergent chemical treatment to deal with weeds that were coming up,” Joe says.

Sylvia and Joe didn’t live on the farm then, and when they came to visit the planting in early June, “it looked horrible and full of weeds. I was walking around looking for native grasses and couldn’t see much coming up,” Joe says. Mowing is critical in the first three years of prairie plantings, and the trick is to mow as high as you can, he recommends.

“I mowed it off at about eight inches high to clip the weeds off. As prairie grasses mature, it’s even more important to keep the mower up high. If you cut prairie grasses below the place where it starts sending out shoots [the node], it can kill the plant.”

The Luetmers long planned to have the prairie grazed, so when the land came out of CRP in 2019, they started working with young farmers Tyler and Kate from Early Boots Farm and installed fencing and watering. 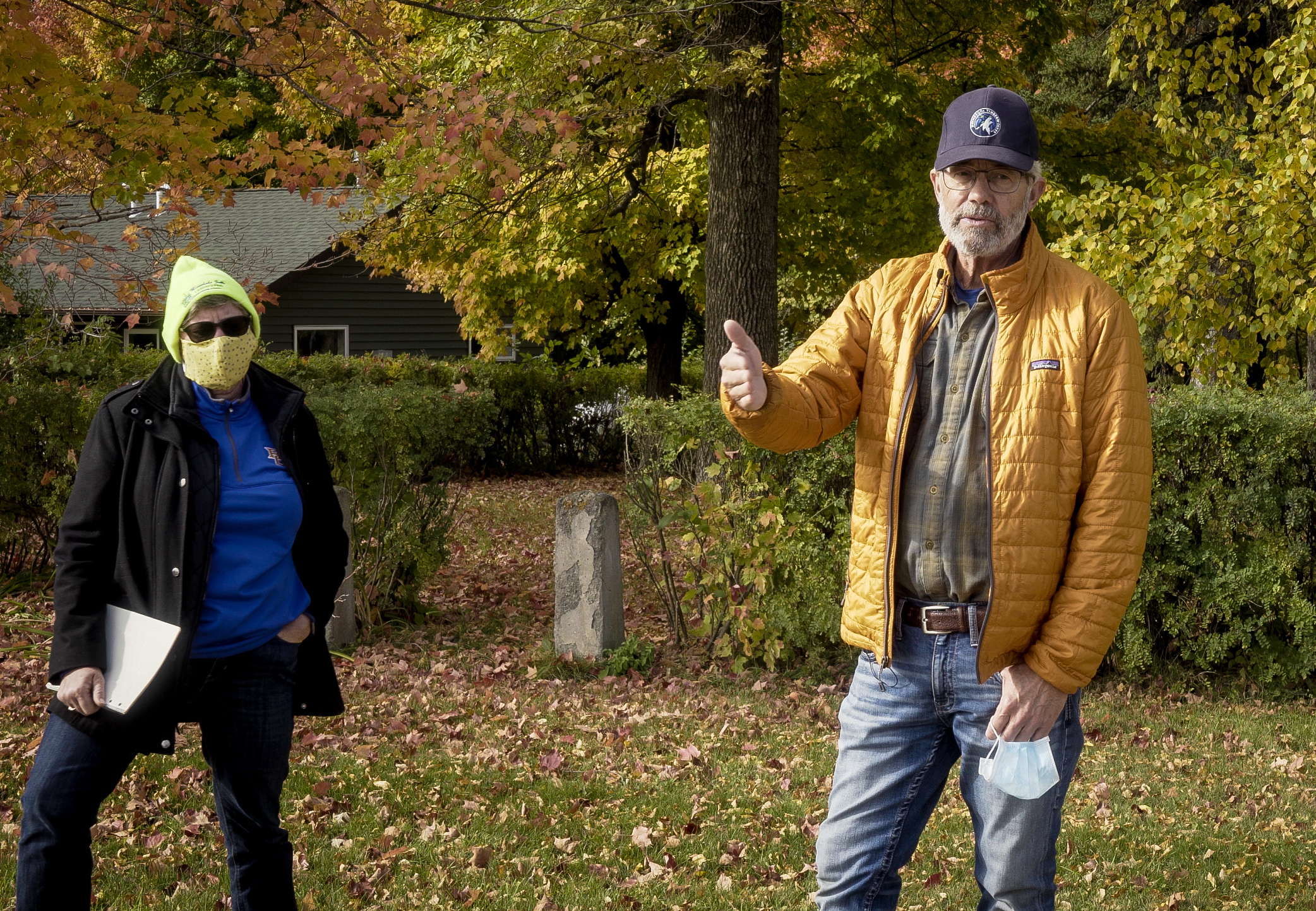 “This year, we rotated 31 head of cattle every day from paddocks of about an acre each,” Joe says. “They moved across the prairie four times from the middle of May until they came off the second week of September. The Angus low-line cross gained 1.3-1.4 pounds of weight gain per day, so we got a lot of feed out of this.

“One of the key things about grazing: If you leave cows on for more than three or four days, they will go back and nip the new growth, which really stresses the grasses because the roots are putting energy into that new growth. The more you let the grasses get chewed down, the less leaf you have for photosynthesis, so the longer it takes for the grasses to come back.”

Says Sylvia: “It was really amazing to see how much the grass grew by the time the cows came back each time. Having spent lots of time in rural spaces and seeing over-grazed hills, I didn’t know what to expect.” She reports the cows did eat the prairie flowers, and she missed seeing them.

In an attempt to help the young farmers at Early Boots Farm, the Luetmers established a cost share arrangement whereby they are amortizing Tyler’s and Kate’s portion of the fencing investment until their portion is paid. Then they will pay cash. The rate is not per acre rental but uses ‘AUM,’ which is based on the amount of feed the land is producing. They use the weight gain of the cattle to estimate that AUM (Animal Unit Month).

According to the Luetmers, CRP rules could be changed to better benefit the environment and farmers: “We could have renewed the prairie in CRP, but we chose not to, because it’s limiting on grazing. About five years ago, NRCS [the Natural Resources Conservation Service] started doing CRP contracts that would allow grazing as a management tool. But you can only graze once every three years and you cannot graze until after the nesting season is over, which is the end of July. Well, if you look at a piece of prairie that hasn’t been grazed for three years and put cattle out at the end of July, there’s hardly any feed value anymore. So few people are willing to do that. You won’t get enough value out of the grazing to offset the cost of setting up the fencing and watering.”

The rent the Luetmers charge for the land is “enough to offset the taxes,” Joe says. “We would get more money renting to a row cropper or re-enrolling in CRP because the CRP rates this year were quite high but we’re not in this for the money. We’re passionate about restoring native prairie and wetlands, building soil health and contributing to carbon capture.”

Says Sylvia: “Our values also include passing land to new farmers and creating land access. We couldn’t do that with this farm if we kept it in CRP, because there was no potential for a new farmer to make a living with the program.”