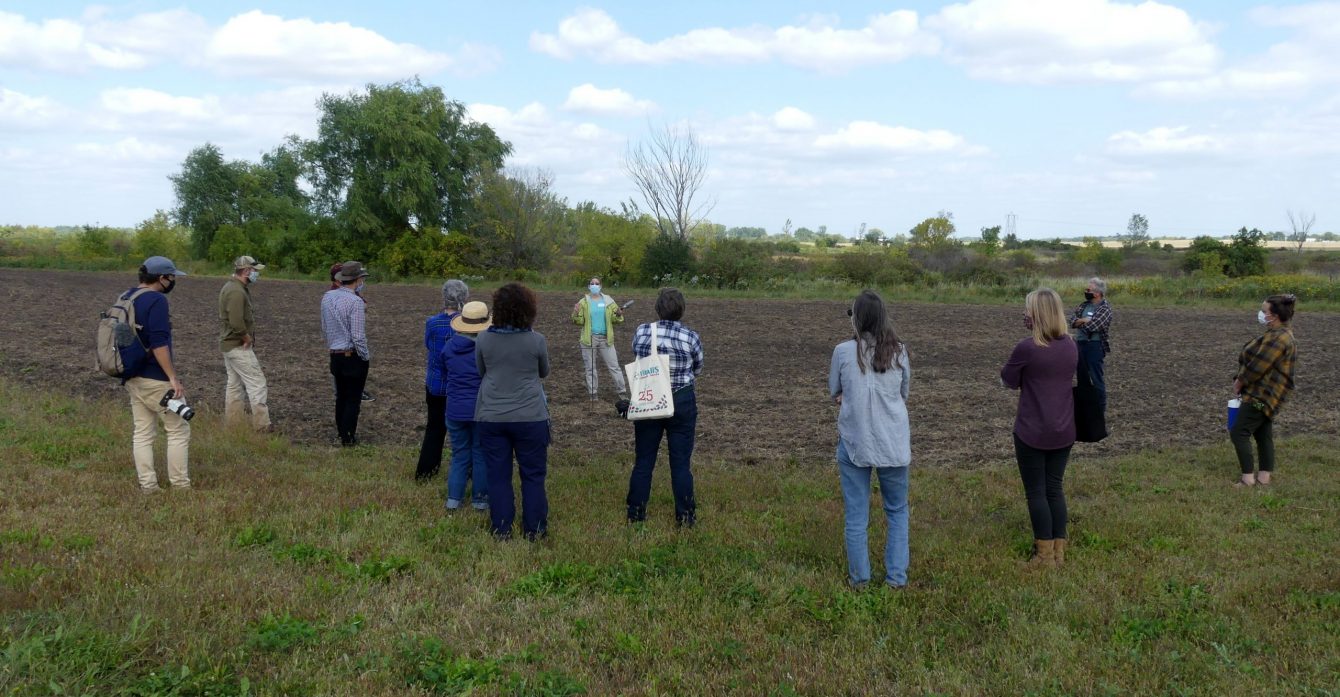 Climate Land Leaders™ traveled (with their masks) to the Main Street Project Farm in mid-September for a socially distanced farm tour and dive into soils.

The Climate Land Leaders™ are all owners and managers of farmland who are transforming their land with conservation practices to address the climate crisis. Main Street Project is incubating the project, and former Executive Director Julie Ristau also serves as a Climate Land Leader. 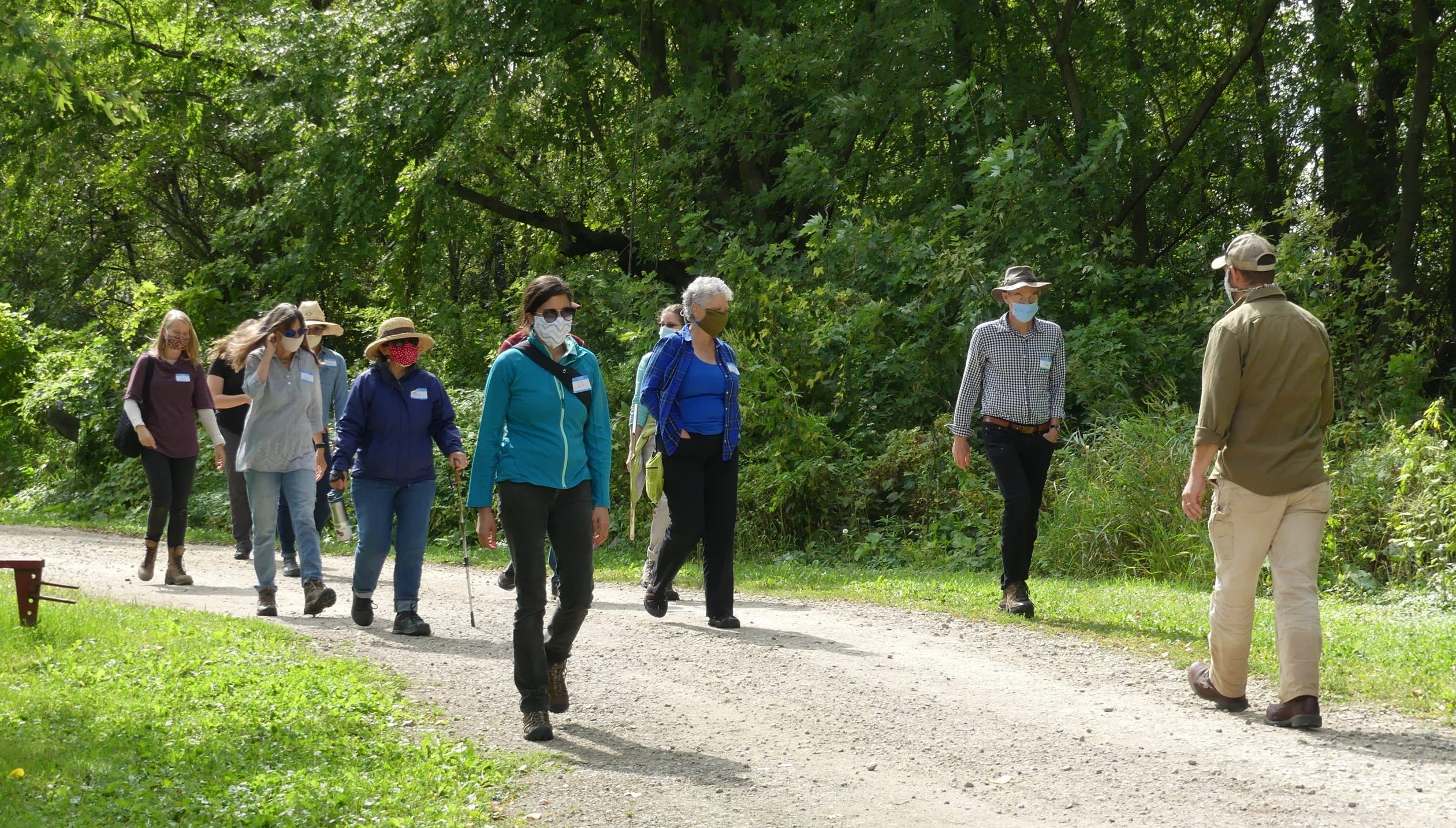 We started with a boxed lunch from the Birchwood Café in Minneapolis, a restaurant with a stalwart commitment to buying from sustainable farmers. Then Co-Farm Managers Josie Trople and Wyatt Parks, with help from Julie and Ecological Design’s Paula Westmoreland and Lindsay Rebhan, led a tour of the farm.

According to Climate Land Leader Sally McCoy of Edgerton, Wisconsin: “I learned some things about grazers, lots about soil, and cool things like making a drying shed [for botanical crops], opportunities for marketing, ways to bring the community into the process, and working with the hydrology of the land.”

Then the group moved onto soils. Measuring soil health is an important part of being a Climate Land Leader, as the soils will tell us if conservation changes are increasing soil organic matter and biological activity, as well as sequestering more carbon in the soil.

Soil on the hilltop has long eroded away after years of tillage, lack of plant cover and crop diversity. Now the hilltop’s remaining soil is heavily compacted, which does not allow even gentle rain to soak in. Dr. Weyers demonstrated this compaction with a water infiltrometer. Main Street Project has planted tillage radish, peas, oat and clover and rotationally grazed the hilltop to add organic matter, but there is still work left to do to return that area to soil health. 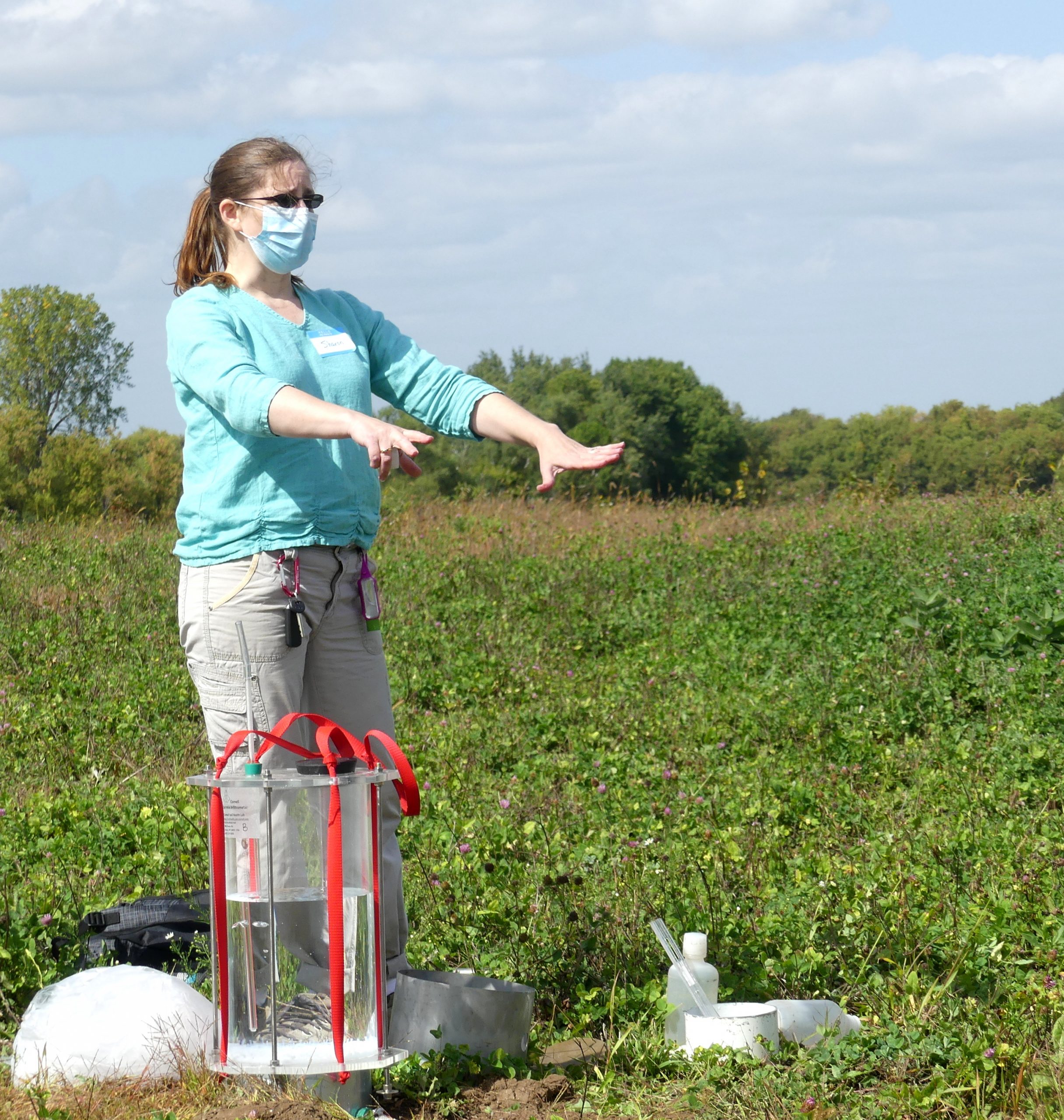 “The hilltop soil is sandy and not dark/brown, so we had a clear indicator that the organic matter content was low on the hilltop in comparison to the hay field,” Dr. Weyers says. And indeed the microbiometer test for the hilltop showed 52 micrograms of microbial carbon per gram of soil while the hay field had 354. The wetland, which has been receiving the eroded soil from the hilltop for years, showed 415 micrograms.

The Climate Land Leaders™ will be doing their own examination of their soils by submitting samples to the Cornell Comprehensive Soil Testing Lab.

“I am a hands-on learner, so seeing things in actuality is helpful,” Sally McCoy says about the farm visit. And after six months of Climate Land Leaders meetings online due to COVID-19, Sally reported that “it was very nice to meet some Climate Land Leaders in person and have a chance to chat. That felt really important during this time of distance learning. I could ask each member about their projects in more detail. Plus it was also such a beautiful setting.”