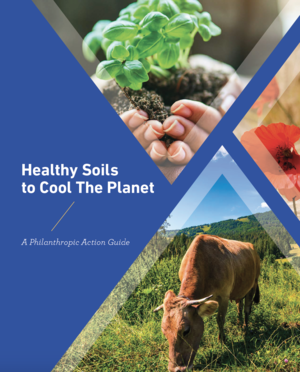 Main Street Project is playing a key role in building “healthy soils to cool the planet,” according to a philanthropic guide just released by Breakthrough Strategies and Solutions.

Protecting and restoring global soils will limit global warming by sequestering carbon emissions, according to the report, which is a call for foundations to invest in healthy soils. “When we build carbon in agricultural soils through regenerative practices, we achieve extraordinary benefits.”

At Main Street Project’s farm, you can see a variety of these climate-friendly practices in action. After purchasing our farm in 2017, we began transitioning it from a dead monoculture of corn and bare ground to organic perennial and poultry production. We planted nearly 12,000 hazelnuts (now mulched and composted), an acre of asparagus and 9,000 garlic cloves. We covered the Farm’s degraded soils and began rebuilding them with cover crops. We restored wetlands and waterways that were sending polluted water into our streams and rivers.

For more on the regeneration of our farm’s soils.

The full report, Healthy Soils to Cool the Planet: A Philanthropic Action Guide