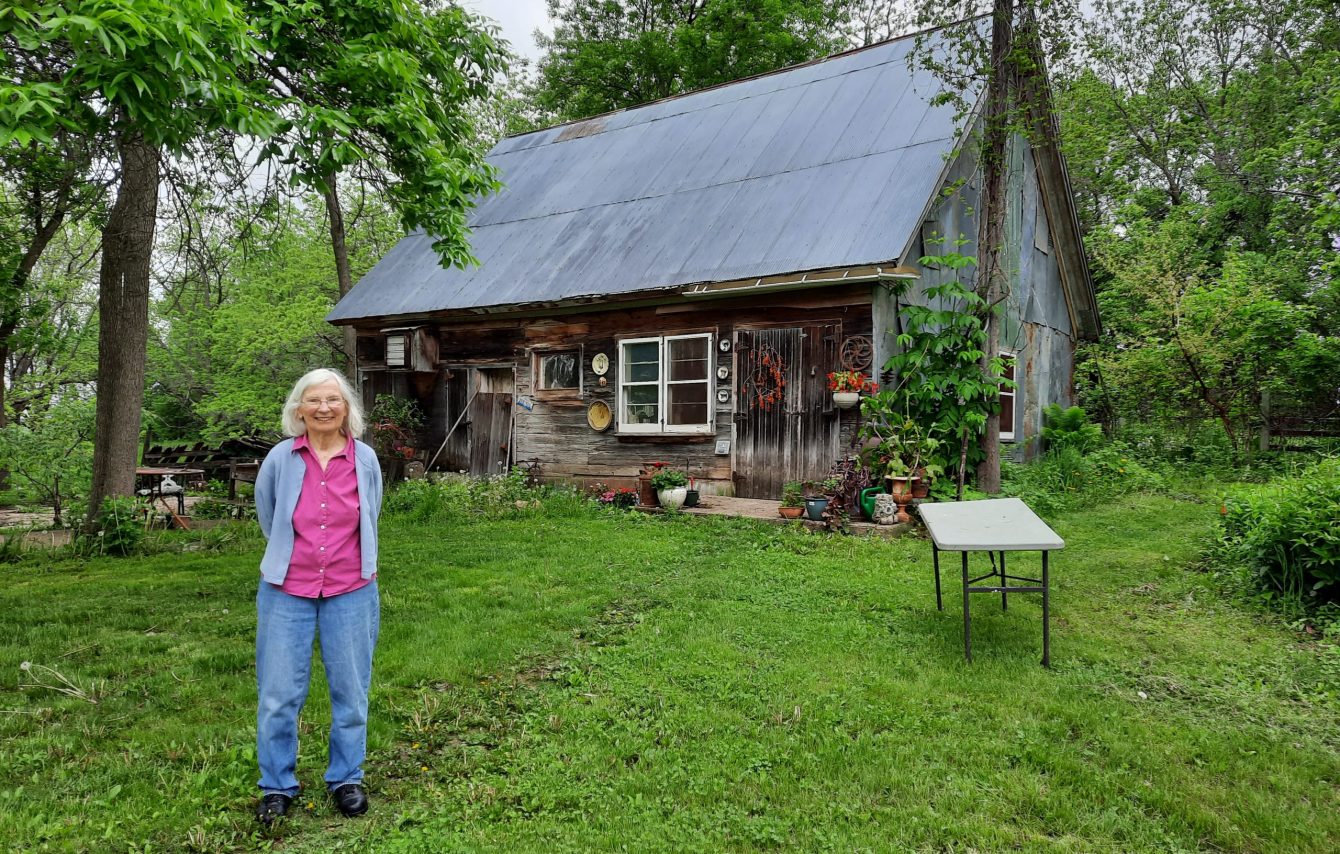 A few weeks ago, I had a delightful visit with Mary Ellen Frame of Northfield (pictured above), a renaissance woman and photographer who has farmed, run a restaurant, staffed a historical society and was an early member of the Sustainable Farming Association of Minnesota. Now an elder herself, she – like so many of us – developed the conservation ethic through our elders now gone.

Mary Ellen’s parents Bill and Minnie moved with their children to the farm in the 1940s, where “for nearly a hundred years, farmers had been clearing trees to extend their cropland,” as she documented in a delightful essay titled “Bill and Trees.” Her father was determined to reverse that pattern:

“We went out one early spring and planted hundreds of what appeared to be skinny sticks with a bit of root, in straight rows, on the north and west sides of the farmstead. Bill had researched and planned this windbreak so that on the outside were fast-growing laurel leaf willows and then Norway poplars, which would soon give some shelter to slower-growing ash and black walnuts, planted next. The inmost rows were pine and spruce, to cut the wind more effectively and to provide green in winter.”

This windbreak was just the beginning of Bill’s and Minnie’s conservation commitment. They planted a black walnut orchard, hickories and American chestnuts, American persimmon, apricot and gingko trees. Many of these trees still thrive. 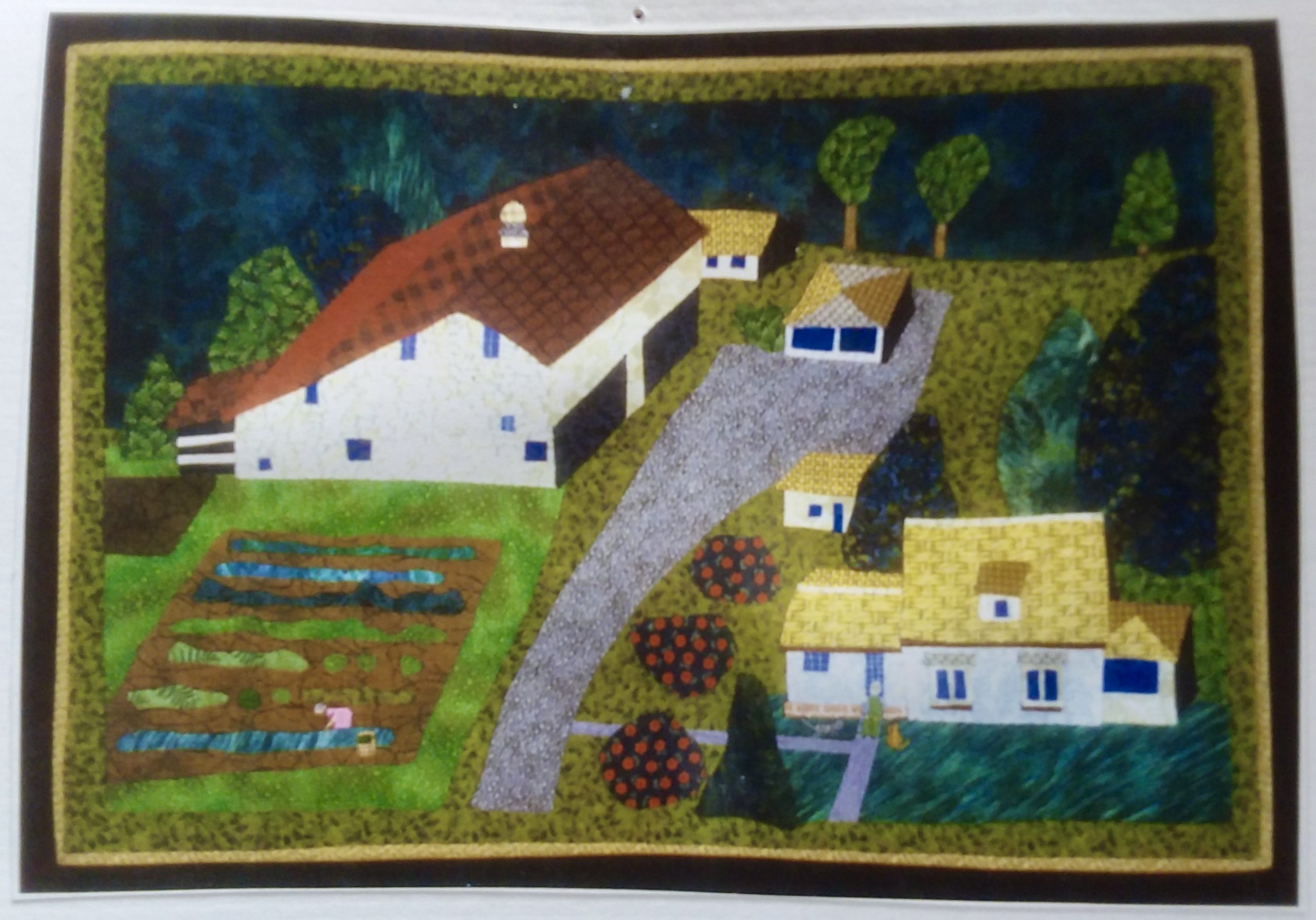 Teresa Opheim’s grandparents’ farm, with shelterbelt visible in the back. Artwork by Meg Prange, Fabriwocky

My grandfather, who spent his entire life on the farm in Northwest Iowa, had the same commitment to trees. When I look at an aerial photo of my family’s farm in the mid-1900s, I am astounded at the thick windbreak nestling the house, barn and other buildings. I once had a biology assignment to collect a leaf collection and asked for Grandpa’s help. He soon drove over, took me out for a root beer and presented me with leaves from: Locust. Ash. American Elm. Mulberry. Weeping Willow. Hawthorn. Mountain Ash. Hackberry. Pussy Willow. Sunburst Honey Locust. Japanese Pagoda. Sugar Hard Maple. Crimson King Maple. Harlequin Maple. Linden. Gingko. Norway Maple. Russian Olive. Hickory. Sycamore. And a variety of apple, apricot, plum, cherry, chokecherry and pear trees. All from his farm!

Climate Land Leader Sally McCoy, who grew up on a farm in Northeast Iowa, says “We have a family saying that someone can be ‘a good potato’, meaning, humorously, a good person. The saying came from our grandfather’s appreciation of something so humble as a potato. He would point out all kinds of garden produce to us, teaching us how to regard a gift of the earth. A similar plant love was demonstrated by other grandparents.

“Our parents carried on this love of nature, remarking on sunsets, beautiful trees, animal movements, temperature changes, all kinds of natural events almost daily. We were taught to regard Earth as a source of beauty, something to be treasured, not just an economic asset. All six of their children continued the interest in stewardship of the land in some way.”

Another Climate Land Leader, Jane Shey, says: “For as long as I can remember, we were planting trees. I did a lot of watering with a bucket! Dad was one of the first users of CRP [Conservation Reserve Program] in the 80’s. He always said leave the land better than you found it.”

Jane’s grandparents “lost the family farm in March 1936 and, as you can imagine, this had a profound impact on the family’s lives. They were able to purchase another farm but, of course, it was never as good as the home place. The first piece of land that Dad bought was corn ground that was hilly, and he immediately turned it into pasture and hay ground. He said he bought the land because it reminded him of the land in Southern Iowa where he grew up. All of that land is either in CRP, WRP [Wetlands Reserve Program], state wildlife area or hay today.”

In Mary Ellen Frame’s case, her parents chose trees and shrubs “with an eye to the particular glories of each season,” she writes in her essay. “In spring the show starts with Juneberry, apricot and wild plum blossoms, followed by lilacs and rose and white crabapples. In midsummer the green is patterned by varied leaf shapes and fall blazes out its robust spectrum. In winter there’s the intricate lattice of bare trees [and] the farmstead seems swathed in white lace as each branch and twig is accentuated by a thick coating of sticky snow.”

The Sharing Our Roots Farm – located close to Mary Ellen’s farm — is continuing the elders’ tradition of planting trees, including an apple orchard for the community and thousands of elderberry and hazelnut trees.

Like Jane Shey’s father always said: Leave the land better than you found it.